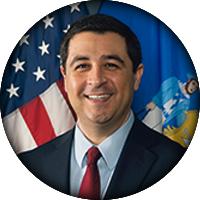 Josh Kaul was sworn in as Wisconsin’s 45th Attorney General on January 7, 2019. Josh’s top priority is public safety. Under his leadership, the Wisconsin Department of Justice has worked to combat the opioid epidemic and the increasing use of meth in Wisconsin, to make our schools and communities safer from gun violence, and to pass legislation designed to prevent Wisconsin from having another backlog of untested sexual assault kits. Josh is also committed to fighting for clean and safe drinking water and against climate change and to protecting the rights of Wisconsinites.

Josh served as a federal prosecutor in Baltimore, where he prosecuted murderers, gang members, and drug traffickers. After moving back home to Wisconsin, he worked to protect our right to vote, going to court to challenge restrictions on voting.

Josh grew up in Oshkosh and Fond du Lac. He went to college at Yale, majoring in history and economics and graduating with honors. He then attended Stanford Law School, where he served as President of the Stanford Law Review.

Josh lives in Madison with his wife, Lindsey, and their two sons, Simon and Henry.

Download a high resoution photo of the attorney general.