APPLETON, Wis. – On July 27, 2022, the Lake Winnebago Area Metropolitan Enforcement Group – Drug Unit (LWAM) and Drug Enforcement Administration as well as the Appleton Police Department, Outagamie County Sheriff’s Office and Wisconsin Department of Justice Division of Criminal Investigation  served six search warrants in the City of Appleton and Town of Grand Chute, Outagamie County, Wis.  The search warrants were obtained as the result of an ongoing narcotics related investigation involving the distribution of illegal dangerous drugs in the Fox Valley.

As a result of the search warrants, approximately 16 pounds of methamphetamine and cocaine as well as nine firearms, quantities of U.S. Currency, and three vehicles were seized.  The street values of the seized drugs are estimated $100,000 and $200,000, depending on the manner and means of sale.  No one was injured during the service of the search warrants.  Several individuals were arrested as a result of the investigation.  The names of arrested individuals, who are presumed innocent until proven guilty, are not being released at this time pending formal charges.

“Drug trafficking poses a serious threat to public safety, and law enforcement officers around the state are committed to putting drug dealers behind bars,” said Attorney General Josh Kaul. “Thank you to all the officers whose hard work on this investigation has led to arrests and the seizure of a large quantity of dangerous narcotics and nine firearms.”

“The Appleton Police Department appreciates the assistance and support from our local and federal partners to ensure the continued safety of our community,” said Appleton Police Chief Todd Thomas. “The countless hours and collaborative work yesterday to safely remove drugs and weapons from our streets exemplifies the dedication needed to keep the Fox Valley a safe place to live."

“LWAM remains committed to working collaboratively with its law enforcement partners to remove illegal drugs and guns from the communities we serve as well as hold those who distribute these dangerous drugs accountable for their actions,” said LWAM Special Agent in Charge Jeremiah Winscher. “The results of these search warrants and seizure of the associated drugs and guns will have a positive impact on all of our communities.”

LWAM is a multijurisdictional task force comprised of investigators from 15 participating law enforcement agencies within Winnebago, Outagamie, Fond du Lac and Calumet Counties.  LWAM’s mission is the investigation and enforcement of both state and federal drug trafficking laws with the goal of preventing the flow of illegal and dangerous drugs into the communities within these counties as well as holding offenders who chose to distribute dangerous drugs within these communities accountable for their criminal activities.

No further information can be released at this time, as this investigation remains ongoing. 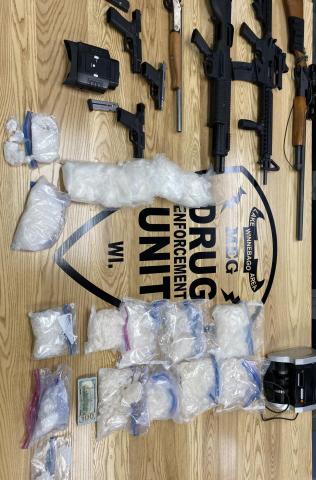