MILWAUKEE, Wis. – Attorney General Josh Kaul today introduced Alicia Kozakiewicz, a national advocate and survivor of a brutal abduction by an Internet predator, to K9 Kozak, an electronic detection canine named in Alicia’s honor that works at the Wisconsin Department of Justice (DOJ).

“K9 Kozak helps with the investigation of internet crimes against children by locating hidden electronic devices,” said Attorney General Kaul. “In naming him, DOJ wanted to honor Alicia, whose advocacy played a critical role in bringing Kozak to the DOJ team and has helped law enforcement get justice for survivors.”

“Alicia’s Law saves lives and helps to protect children from child predators. In an investigation, a case is only as strong as its evidence. This evidence can now be hidden on very tiny electronic storage devices. Today, I am so honored to finally meet my namesake, K9 Kozak, who has been specifically trained to locate this evidence,” said Alicia Kozakiewicz. “Together, we work to keep Wisconsin’s children safe!”

Kozak is named in honor of Alicia Kozakiewicz, a survivor of a brutal abduction by an Internet predator and held hostage and tortured in the predator’s Virginia basement at the age of 13. She is also the namesake for Wisconsin’s “Alicia’s Law.” Alicia’s Law, authored by Sen. Van Wanggaard (R-Racine) and signed into law in 2016, provides funding for internet crimes against children investigations and supports DOJ’s electronic detection canine program.

Under the electronic detection canine program, Kozak works with the DOJ Division of Criminal Investigation (DCI) and is trained to sniff for particular chemical compounds that are found in electronic devices such as cellphones, hard drives, laptops and other data storage devices.

Kozak began his training in public service in the Indiana Canine Assistant Network (ICAN) program. ICAN allows inmates from Indiana Correctional facilities to train and place assistance service dogs in homes with disabled individuals. During this time, Kozak was recognized to possess characteristics sought in law enforcement scent detection canines. Kozak was identified as an ideal canine for ESD detection and began his training in the Spring 2018.

Kozak and his handler DCI Special Agent Tamara Taubel’s primary assignment is to the ICAC Task Force. Kozak is utilized to locate vital evidence in these types of investigations. In general, law enforcement has seen a shift in more electronic storage devices being used in all types of crimes. As a result, Special Agent Taubel and Kozak have been deployed and successfully located electronic storage devices of evidentiary value in ICAC, narcotic, homicide, missing person, invasion of privacy, and financial investigations throughout Wisconsin.

Kozak’s first deployment was in August of 2018.  Since then he has been deployed to a scene 47 times. He’s located 136 electronic storage devices, 99 of which he found after officers had already searched the scene. Kozak was also twice deployed as a comfort canine for a victim in court proceedings.

The Wisconsin ICAC Task Force is comprised of DOJ personnel, police departments, and sheriff’s offices from around the state. The DOJ ICAC Task Force also provides online safety training for parents, teachers, and communities through educational programming and the Protect Kids Online Podcast.

Find more information and resources on Internet safety at www.protectkidsonlinewi.gov. 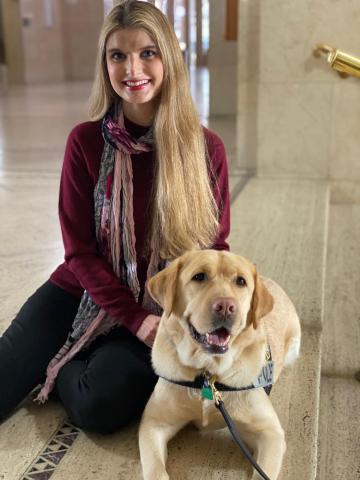