“Thank you to everyone who participated in the Missing Persons Poster Contest,” said Attorney General Josh Kaul. “We must keep raising awareness about those who continue to be missing.”

May 25 is National Missing Children’s Day, bringing awareness to missing and exploited children in the United States. The U.S. Department of Justice recognizes this day by holding an annual poster contest for fifth graders around the nation. Each state hosts a statewide competition before submitting the poster to the national contest.

Kennedy Hamilton was named the statewide winner at a ceremony at Bangor Elementary School on Wednesday. Kennedy wrote this about her poster:

The contest was administered in Wisconsin by the Department of Justice (DOJ) Clearinghouse for Missing & Exploited Children & Adults. The clearinghouse actively assists law enforcement, victim families, the National Center for Missing and Exploited Children and other missing children organizations in cases involving missing children, human trafficking victims and children who are victims of enticement via the Internet.  Wisconsin’s Clearinghouse provides technical investigative assistance, referrals and advocacy in navigating the criminal justice system, along with other resources, services and information, to victim families of children and adults who are missing and considered endangered in the state of Wisconsin, nationwide and internationally.

To see a list of those missing in Wisconsin, go to: https://www.missingpersons.doj.wi.gov/wisconsin-missing-persons 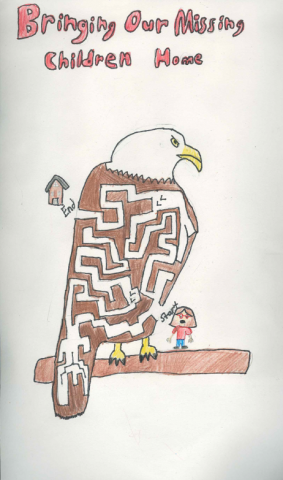